For generations, American Indian students have nurtured community at the University of Wisconsin-Madison. In the 1970s, they began an initiative to create an academic home where students, staff, and faculty might gather in the service of Native nations. Fifty years later, we celebrate their stories of education and activism. 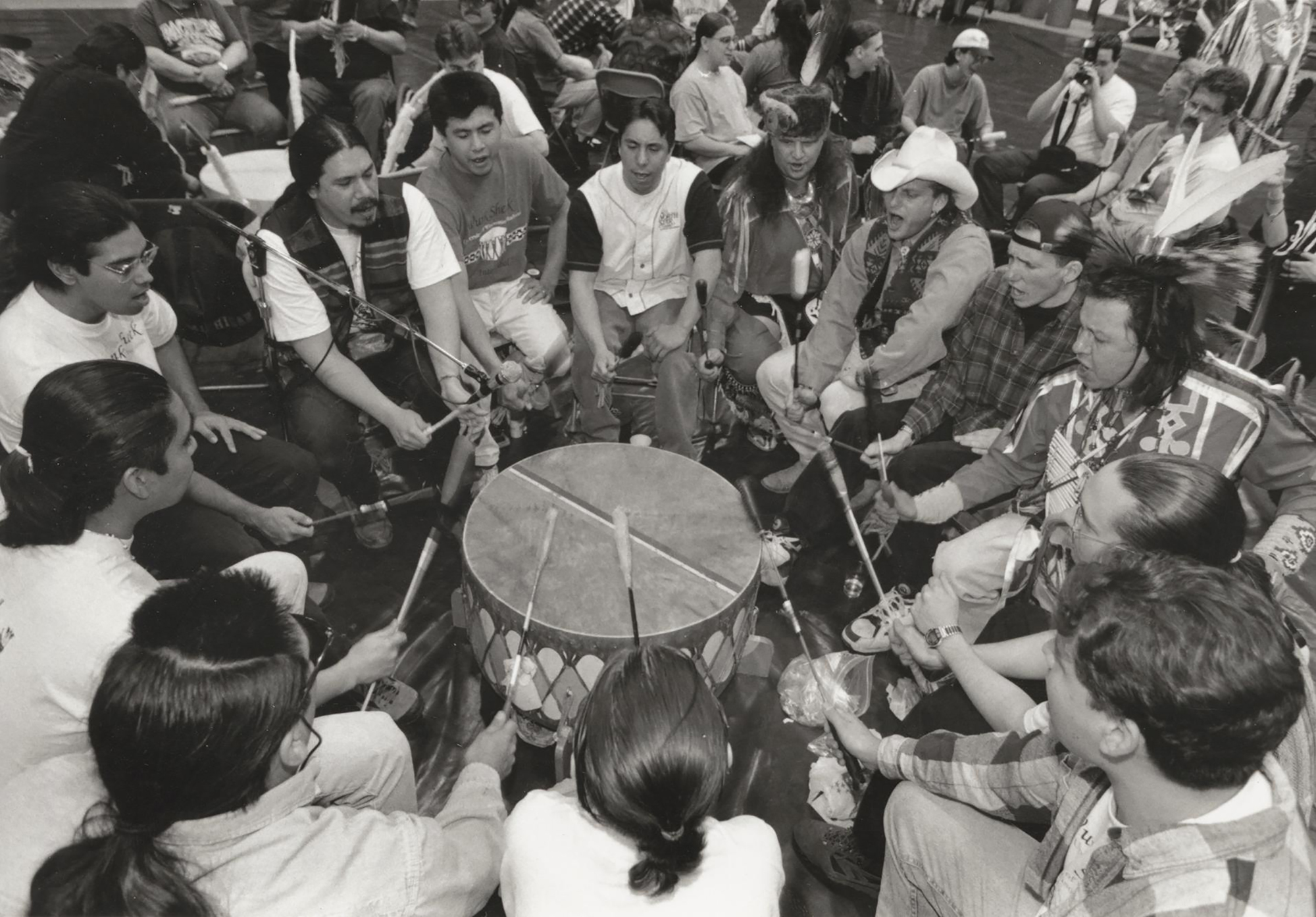 The Story of American Indian Studies at UW-Madison

In the autumn of 1970, a group of about twenty Native students came together to grow their community at the University of Wisconsin-Madison. Calling themselves “The Coalition of Native Tribes for Red Power” (CNTRP), this intertribal group of Native undergraduates delivered a document to University Chancellor Edwin Young. In so doing, these Native students at UW-Madison joined hundreds of other Native students across the country in a chorus calling for the creation of American Indian Studies on campuses far and wide.

In Their Words with Ada Deer

After two years of discussions, debate, and outreach, the Coalition Native Tribes for Red Power (CNTRP) had distilled their aspirations on campus into four issues, which are outlined below. “We, the Coalition of Native Tribes for Red Power, on this day…present to the University of Wisconsin these challenges,” their manifesto began. They called for the university to employ at least four Native Americans to work with students on campus, to increase the enrollment of Native students on campus through active recruitment, to devote more resources to their success, and that a language requirement for Native students be altered so that any Native student who speaks their language be accepted as a first language and English be accepted as a foreign language requirement. To up at ante, the students also announced a “RED POWER Pow-Wow” to ensure that all eyes would be on the university’s response. 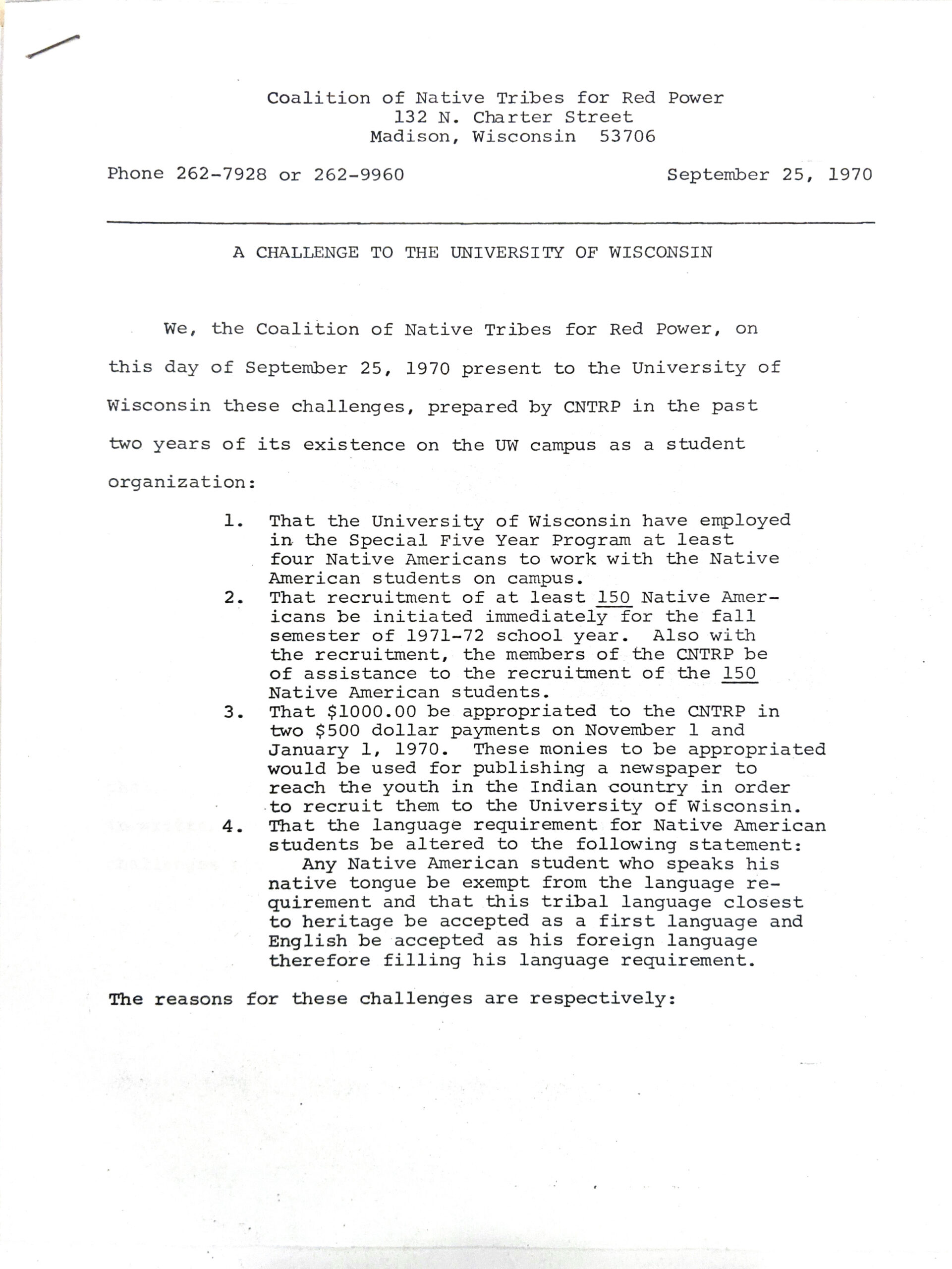 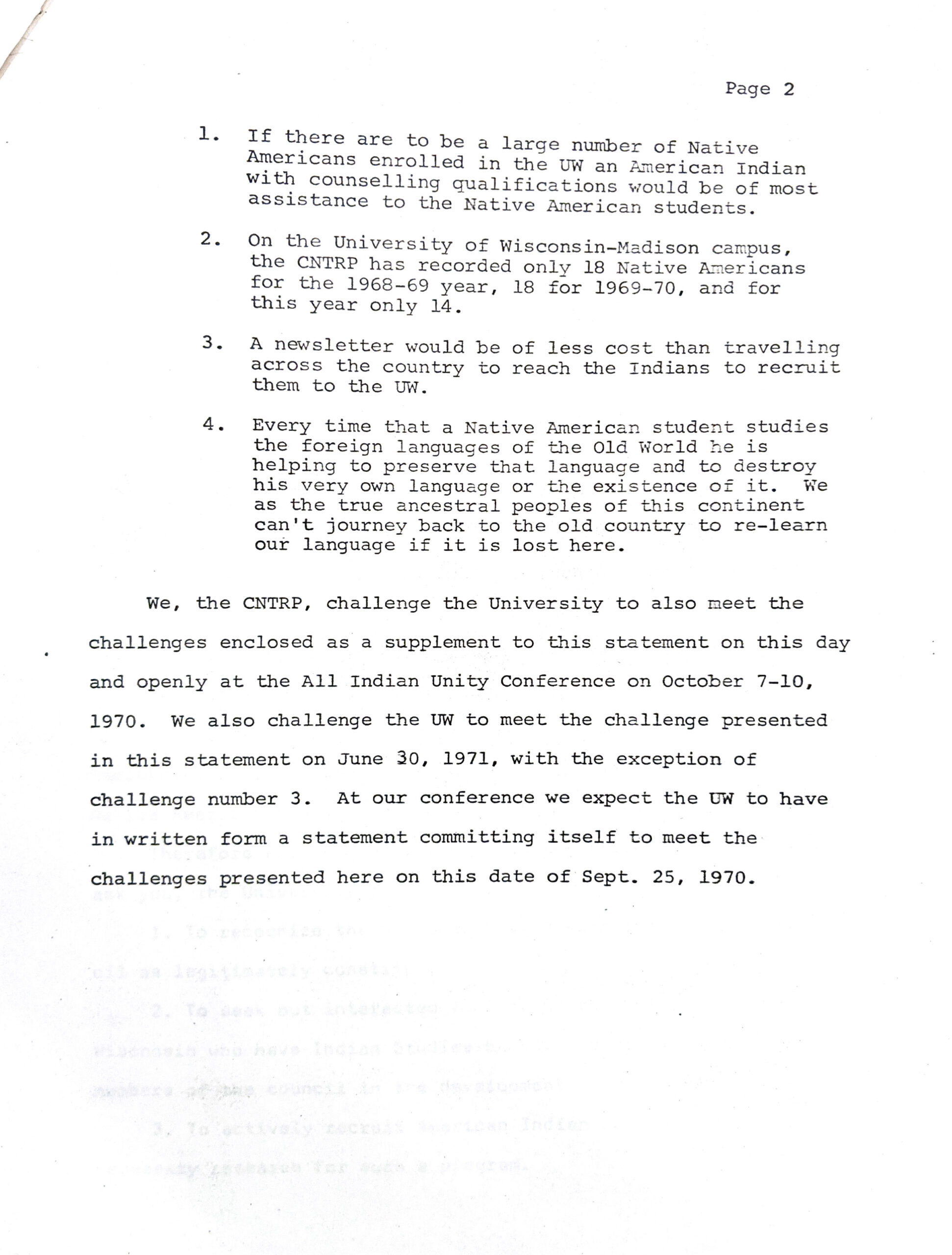 On October 9th, Vice Chancellor F. Chandler Young delivered a statement on behalf of the university in response to the CNTRP’s four challenges. Young revealed that the chancellor’s office had decided to explore the creation of a Native studies program. “We are presently surveying our faculty and staff to find qualified people who would be willing to participate in this enterprise,” Young told the students. The news spread. Under the headline “More Indians to Be Sought by University,” the Wisconsin State Journal reported, “The University of Wisconsin will increase its efforts to enroll more Wisconsin Indian students and is looking for faculty members who can teach courses dealing with American Indian studies.” This set off a year-long negotiation between Native students, faculty, administrators at the University of Wisconsin-Madison.

The university’s bureaucracy began to stir. Chancellor Edwin Young directed the formation of an Ad-Hoc Committee on Native American Programs. Young explained to candidates for this committee that the CNTRP “composed of American Indian students, is interested in securing a great commitment from the University to recruit and provide scholarship assistance for American Indian students and to offer more courses dealing with Native American studies.” Young then charged this group with a mission: “The committee will have to make specific recommendations as to what role, if any, the Madison campus should take in providing greater educational opportunities for Wisconsin and American Indians.”

In Their Words with Janice Rice 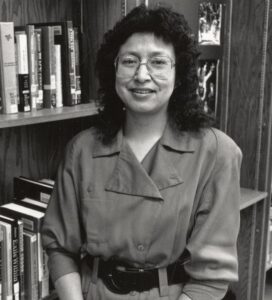 During the early 1970s, Janice was a young, Native woman at UW, actively participating in the creation of Native spaces on campus, often through activism. Janice, who received her Master’s degree in Library Science from UW in 1975, became a pillar of the Native community at UW and in Madison.

But there was a problem. On December 2nd, Merritt J. Norvell, Jr. Assistant to the Chancellor, wrote of a meeting he had with the Native students. “I am concerned as are the CNTRP members that there is a notable absence of Native Americans on the committee,” Norvell reported. “In addition, there are no student participants. This will generate credibility questions immediately,” Norvell explained. Evidently, the Native students had expressed an urgent need to sit on the university’s committee. “It became apparent that once again we are developing programs in directions which we perceive as being best for them, without providing them with an opportunity to have legitimate input,” Norvell cautioned. “Things are done for them, to them, about them, but never by them.”

Norvell’s warning seemed to have broken through. Soon after, Chancellor Young wrote to CNTRP leader Sandra Waubanascum to appraise her on his progress towards satisfying the group’s demands. Young asked Waubanascum to solicit two students who would serve on the committee “in order to insure [sic] that the committee has effective student input.” He asked her, on behalf the CNTRP, to produce these names. “I would appreciate receiving the names as soon as possible so that the committee may begin its important work.” Eventually, Roberta Hill, John Neimisto, and Sandra Waubanascum all joined the committee. Meanwhile, Lehman Brightman and Ada Deer became informal advisors. With Native people finally attached, the committee got to work.

Over the course of the academic year, the Native members of the Committee lobbied for the creation of an academic home for Native studies. They wanted courses that addressed the contemporary problems confronting Native nations in Wisconsin. “By such study the Indian students hope to become more aware of their heritage and to reinforce their cultural identity,” the committee reported. Waubanascum and Niemisto also pushed for tools that might also benefit the efforts of tribal nations as they sought to develop their economic, political, and legal autonomy. “The student members of the committee,” the report noted,” have give[n] highest priority to course[s] in ‘The Law and the American Indian,’ ‘Politics and the Native American,’ and appropriate language offerings.”

In Their Words with Chad Smith

On June 14th, 1971, the Ad Hoc Committee on Native American Programs announced that its work was complete. On June 23rd, a meeting was called to announce the findings. “We recommend that the Chancellor should give highest priority to providing the resources necessary to increase the number of courses available on the Madison campus dealing with Wisconsin and American Indians,” proclaimed the committee. Furthermore, the final report called on the Chancellor to establish a “Native American Programs Advisory Committee” to become a permanent university committee, which would be composed by faculty, students, and a representative from the Great Lakes Inter-Tribal Council. Together, they would be responsible for shaping a curriculum in the College of Letters and Sciences dedicated to Native studies. Ultimately, the committee concluded that once the preliminary work was done, “Native American studies shall be granted the status of a full-fledged academic department.” A press release on July 9th, 1971 proclaimed that the recommendations of the committee had been “endorsed Friday by Dr. Edwin Young, chancellor of the Madison campus of the University of Wisconsin.” 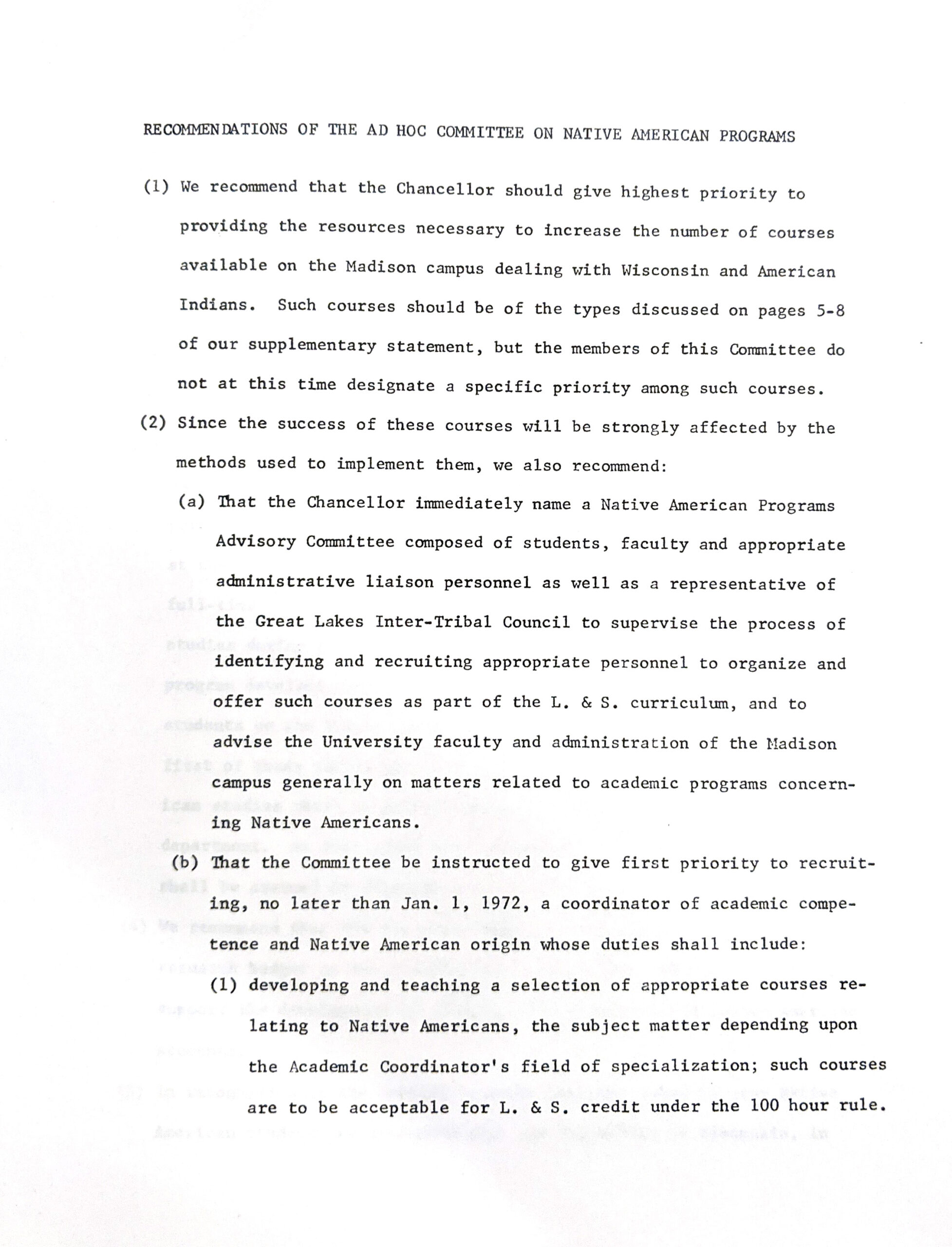 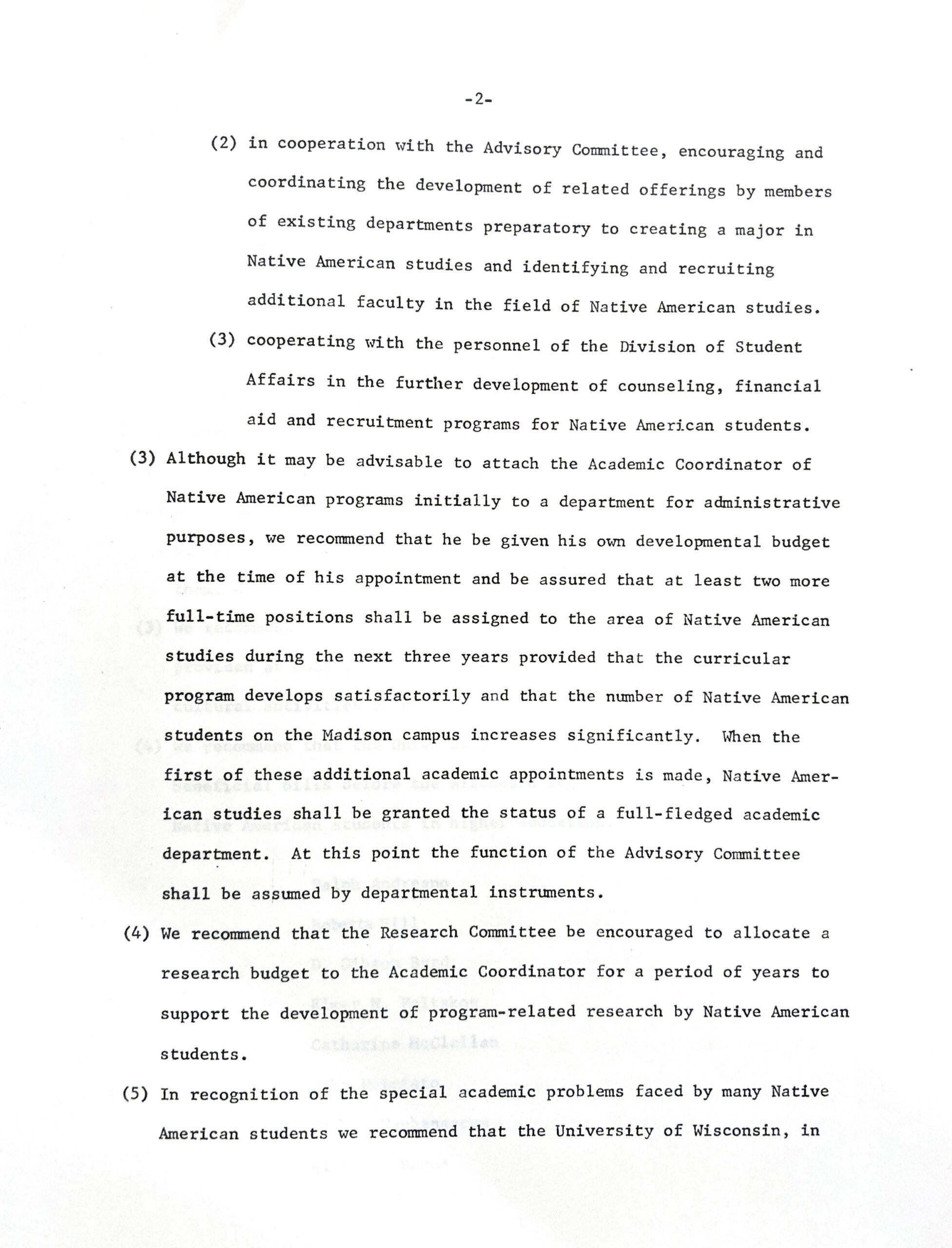 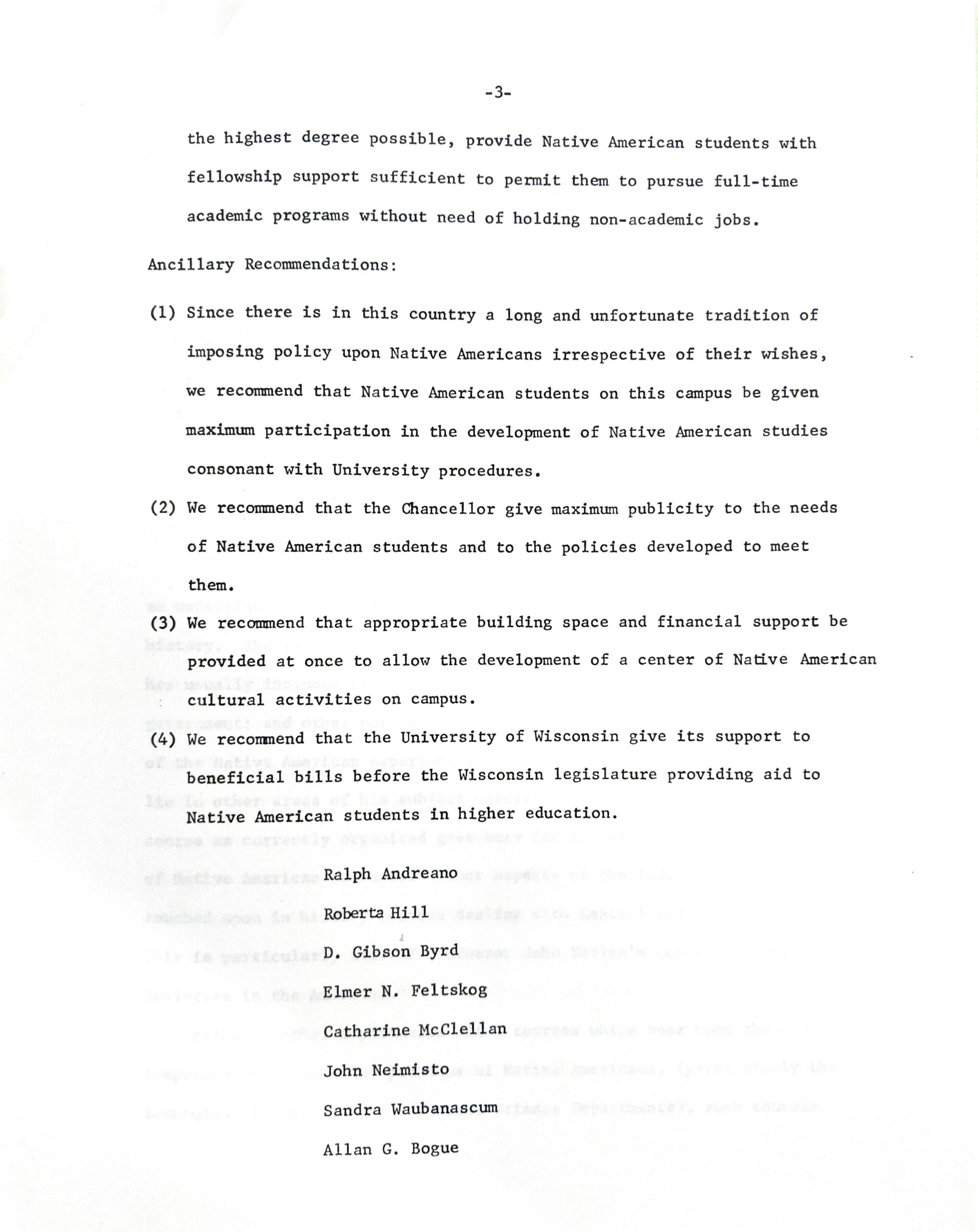 The Ad-Hoc Committee’s final recommendations addressed a number of the CNTRP’s original challenges, with one additional recommendation: the formation of an American Indian Studies Department.

he CNTRP had begun with only a score of Native students and a great ambition.  What started as a set of challenges to their university became an official recommendation to form a department of Native American Studies. The proposed department, however, was eventually reorganized as the American Indian Studies Program and was launched in 1973, with John Niemisto as its first director.

For the first time, courses which focused on contemporary Native nations taught by Native instructors began to be offered to all undergraduates. That same year, the CNTRP evolved into the Wunk Sheek, the official Native undergraduate student organization. Both groups endure fifty years later, and are the proud legacy of the Native students who finally brought American Indian and Indigenous Studies to the University of Wisconsin-Madison.